At A Glance: '21 Sebring Super Tour 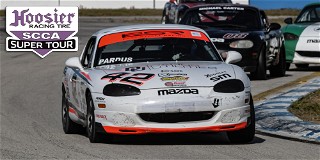 The green flag waves on 2021 in an unofficial manner this weekend at Sebring International Raceway, where the fifth Hoosier Racing Tire SCCA Super Tour season begins.

The race weekend, of course, comes one week after the first U.S. Majors Tour of the year at Homestead-Miami Speedway. Those two events have traditionally paired up on back-to-back weeks to open the year, providing an intense jump on the season for locals and an escape from the cold and snow that many are facing further north.

Sebring itself is one of the most recognizable tracks in the country. The 17-turn, 3.74-mile layout is built on the site of a World War II-era airport, part of which remains active for small aircraft. The long front straight is a part of the original runway, complete with concrete pavement that has led the professional racers who annually compete in the 12 Hours of Sebring to coin the term “Respect The Bumps.”

Nonetheless, the tooth-rattling trip around the lightning-fast circuit is a favorite of SCCA members – as evidenced by the 338 entries listed at press time.

When we last saw the top-of-the-line SCCA road racers, it was at the 2020 SCCA National Championship Runoffs at Road America. On Friday of that week, the Spec Miata field put on an absolutely epic show, complete with finesse and brute force combined on a bed of Hoosiers, with Preston Pardus coming out on top with his second gold medal.

If that thriller was supposed to be a culmination of something, the message didn’t come through. At press time, 66 Spec Miatas are on the Sebring entry list. That includes two-thirds of the Runoffs podium, three of the top-five finishers, and half of the top 10.

Any drivers to watch list begins with Preston Pardus, who took the top spot in that 2020 race before packing up for the NASCAR Xfinity Series race on the Charlotte Roval that same weekend. Former Touring 2 National Champion Rob Hines was thrilled with his Runoffs podium and bronze medal, but will that taste and the experience gained in Spec Miata bring even more success beginning at Sebring?

Brian Henderson ran in the lead pack for the entirety of the Runoffs race and was bumped back in the final corners to miss the podium by just one spot – but drove from the rear of the field to third in his stint of the IMSA Michelin Pilot Challenge TCR race at Sebring last November, so he knows the track well. Todd Buras topped the Runoffs field in 2019 and has had a long career of success, plus the ability to race close to home and with the added power of a warm batch of Krispy Kreme donuts. And if there is a Spec Miata race with a large field, expect to notice Danny Steyn pushing into the front of the field.

In total, four former Spec Miata National Champions (Pardus, Buras, Elivan Goulart and Jim Drago) and eight SCCA National Champions (add Hines, Steyn, Broderick Bauguess and Nick Leverone to the class champs) will line up on grid. It’s true at any Super Tour, but podium finishes at Sebring in Spec Miata will be earned, not given.

One developing story line that will be worth rooting for all season long is the B-Spec community’s personal efforts, which ringleader Frank Schwartz has dubbed “51 in ’21.” After an admittedly slow start to the class history, the front-wheel drive hatchbacks have spawned a cult-following of racers who prove that you don’t have to watch the fastest cars to see some spectacular racing.

The 51 in ’21 goal is an ambitious, yet achievable, effort to get a field of 51 cars at the 2021 SCCA National Championship Runoffs at Indianapolis Motor Speedway. For context, 25 cars ran at the 2020 Runoffs; for additional context, an impressive 21 are on the entry list for Sebring.

So how confident is the B-Spec community in their ability to pull off what would be a spectacular leap in attendance? According to Schwartz, 58 drivers, including three father-son duos, a father-daughter duo, and a husband and wife team, have tentatively committed to the October event.

The Hoosier Super Tour radio team is back again in 2021. The familiar voices from the Performance Motorsports Network return once again for live play-by-play and insight for those not about to make the event, live on the enhanced timing and scoring feed at SCCA.com.

More information on the 2021 Hoosier Racing Tire SCCA Super Tour at Sebring can be found on the event page here.